There are a number of characteristics that seem to go hand-in-hand with outstanding leadership: respect, instilling confidence, enthusiasm, and showing credibility and integrity on a consistent basis. Jerry Colangelo has built his life on these principles. He has a strong sense of vision and passion. He gets people enrolled and committed 100%, to take the necessary action to see that the vision becomes a reality. 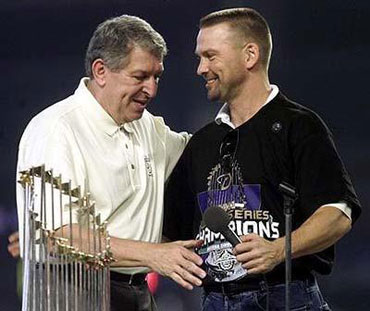 When Jerry Colangelo decided to purchase the Phoenix Suns, it was a calculated risk. In that risk, he saw innovation and was confident in his decision to move forward with the purchase. This confidence and assertiveness made investors excited about the opportunity to partner with Jerry Colangelo as new owners of the Phoenix Suns. Colangelo’s methods of success were anything but scientific. They were intrinsic and instinctive. “He always put the fans’ interest first, even before his own. He knew it was the right thing to do and it was good for business.”-Anonymous Business Owner

As current Chairman of USA Basketball, Jerry Colangelo has built an atmosphere where players can learn and grow. Colangelo is a great motivator and has a gift for verbal persuasion. He gets athletes to “buy in” to the notion that hard work does pay off and that the pursuit of excellence, while a tough journey, is a worthwhile one. One clear demonstration of his theory of achievement was manifested in his ability to lead the USA Men’s Basketball Team to win an Olympic Gold Medal in 2008 and 2012.

Colangelo believes that mutual respect is important. He states, “As a leader you must possess a willingness to listen to input with an open mind. Two-way communication, being approachable and having an ‘open door’ policy makes for very good team relations. Athletes must be encouraged as people and as players.”

”Leaders are always ‘in the game’ right along with the players.” – Colangelo.