Jerry Colangelo’s expertise and impact go far beyond the sports world. He is recognized and acknowledged as an individual who has made a positive impacton the lives of many whose names aren’t on sports and business pages.  He has been active on dozens of boards over the years, ranging from arts and organizations to community revitalization efforts.

His contributions to charity and community organizations have been profound – they include being the Former Campaign Chair for The United Way.  Colangelo raised the standard for community fundraising when he secured pledges for $25 million for United Way.  He supports organizations such as Lift Up America, Boys and Girls Club, Young Life, Mentor Kids and more.

Colangelo has received many awards and recognitions that include: The Humanitarian of the Year Award from Sinai Institute and Health Systems and The Spirit of Caring Award for his passion for improving lives in the community.

Mannie Jackson owner of the Harlem Globetrotters said, “He’s one of the most generous guys you’ll ever meet in your life.” 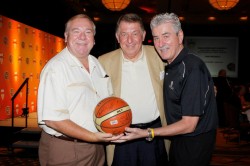