Recently, SI writer Ian Thomsen ranked the top 10 most powerful people in the NBA, placing Jerry Colangelo at #5.  “He no longer is affiliated with the NBA after giving up his ownership stake in the Suns, yet few in the league are more powerful than Colangelo, who controls the Hall of Fame as well as the men’s teams in the Olympics and World Cup.” 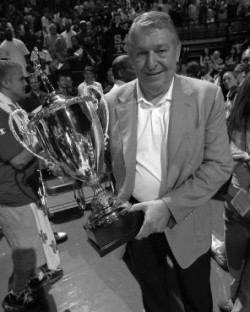 The NBA commissioner remains in charge of the league’s daily business until next February, when his 30-year term will end and deputy commissioner
Adam Silver will take over. Stern’s impact will be felt for years to come, as the new collective bargaining agreement that has reshaped the league will continue to express his point of view long after he has gone — as will attempts by the league to continue to build its business in the foreign markets explored initially by Stern. Even on his way out, he will continue to be the dominant personality of basketball around the world.

The world’s most important player recovered from the lost year of 2010-11 to (1) lead Miami to his first NBA championship, then (2) guide the U.S. to his second Olympic gold medal while (3) establishing a new style of play in which his athleticism, skill and versatility enabled his teams to prevail against taller opponents. The ongoing NBA championship race revolves entirely around James and the Heat, the heavy favorites to defend the title. Free agency awaits in 2014, and already the Lakers and his forsaken Cavaliers are lining up to recruit him. The Decision II awaits.

With labor peace ensured for the next few years, Silver will focus on establishing his leadership. He is expected to be less authoritarian than Stern, though he will also have to show he can bang the gavel and control the microphone in a league filled with loud dissenting opinions. At the heart of Silver’s impending commission will be questions of how much further to push the NBA in order to grow the business. For three decades the NBA has put forth the most articulate commissioner in sports, and that trend will continue with Silver. He should jump to the top of this list next season.

With four championships on behalf of the Spurs, Popovich is the NBA’s winningest active coach and a leading candidate to take over USA Basketball. His influence within the NBA goes far beyond San Antonio, as no executive has created a more extensive tree of GMs (including Sam Presti, Danny Ferry, Dell Demps, Kevin Pritchard and Rob Hennigan) and head coaches (Jacque Vaughn, P.J. Carlesimo, former Lakers/Cavaliers coach Mike Brown, and several former Spurs players including former Mavs/Nets coach Avery Johnson, Doc Rivers, Vinny Del Negro and Monty Williams) as franchises throughout the NBA seek to replicate the efficient success of Popovich’s Spurs. Last but not least, his Spurs remain in title contention for a (sincere gasp) 16th straight year.

He no longer is affiliated with the NBA after giving up his ownership stake in the Suns, yet few in the league are more powerful than Colangelo, who controls the Hall of Fame as well as the men’s teams in the Olympics and World Cup. Colangelo’s ongoing transformation of USA Basketball from a bronze medalist into a winner of the last three international competitions remains crucial to improving the reputation of NBA players on the whole. Another important decision is upcoming for Colangelo, who must hire a coach (to replace Mike Krzyzewski) and then work with him to maintain the winning tradition.

The Thunder’s forward is considered the Tim Duncan of his generation (in terms of values more so than style of play) and a hero to small-market franchises throughout the NBA. When teammate James Harden was traded to Houston on the eve of this season in a move designed to avoid luxury taxes that Oklahoma City couldn’t afford, Durant didn’t complain about the financial limitations of his franchise — instead he responded with his best season yet while extending his prodigious leadership skills. He creates a powerful example for young players, and his matchup with James is on the verge of forming the NBA’s most important rivalry.

No NBA star is more influential among his peers than the outgoing Paul, who maintains friendships throughout the league without damaging the integrity of his all-out play. His talents as a playmaker and leader have transformed the Clippers from the worst franchise in professional sports to the best NBA team in the Staples Center. Paul has attracted title-worthy veterans to L.A. to help him contend for the championship, and this may be the year he reaches his first NBA Finals.

The leader of the Celtics sets the standard for former NBA players who dream of becoming head coaches. Rivers is outspoken in his love for the league and its values, and he is known as a players’ coach without being subservient to players, which has positioned Rivers as a potential replacement for Kzrzyewski. His use of a “defensive coordinator” (beginning in the championship year of 2007-08 with Tom Thibodeau, who established the Celtics’ enduring defensive standards) has influenced rival coaches to bring in specialists. Most important is Rivers’ indispensable role in reincarnating the Celtic tradition and making it relevant in this era of free agency and entitled young stars.

The ESPN president joins with David Levy, president of sales, distribution and sports at Turner to establish the terms by which the NBA is viewed nationally. Both networks have pushed for more transparent coverage, including microphones for players and coaches, in-game interviews and cameras in the huddle. Each of these progressive executives works closely with Silver, and it will be fascinating to see how the coverage changes with the impending change of commissioners.

The NBA’s most provocative spokesman has become the voice of the league. Barkley has been able to articulate in the funniest, least condescending way the values of pro basketball, for better and for worse, without showing any fear of antagonizing the biggest stars. His honesty remains overwhelming and indispensable, and if he should ever make good on his threat to quit broadcasting, interest in the NBA will suffer.